Carlton Bricks is the largest independent manufacturer of bricks in the UK.  It produces bricks with a specific focus on matching the regional styles found in the UK, so appearance as well as practicality is of utmost importance.

Following the observation of “scumming” (white markings) on their bricks, Carlton Bricks needed to take action to preserve the quality of their end products.  Knowing that this issue is often caused by insufficient barium carbonate in the clay mix they raised the quantity but found that the problem persisted.  They noticed the issue was mainly occurring in the final two chambers of a series of drying chambers.

Carlton Bricks narrowed down the cause of the scumming to two theories.  One theory was that the scum was being caused by the addition of lignosulphonate to the clay mixture, a recent addition to their mix used to reduce chipping and make the bricks less brittle.  The second theory was that “dirty gases” were somehow getting into the system and depositing scum on the bricks during drying.

Carlton Bricks contacted Prince Minerals (the supplier of the lignosulphonate) to see if this was a known problem with their material.  Prince Minerals advised that it was not an issue they had ever seen before, but agreed to look into the matter.  Prince Minerals commissioned Lucideon to confirm whether the deposit was coming from within the body of the brick or whether it was being deposited on the surface of the brick, to determine the cause of the contamination.

The samples were analyzed using SEM (Scanning Electron Microscopy) and, along with associated energy dispersive analysis, the scum was shown to be inconsistent with the expected calcium based soluble salt scum that is generally apparent on bricks.  The chemical composition was identified as being calcium, magnesium and sulphur based.

Through detailed testing Lucideon was able to prove that the scum was being deposited on the surface of the brick and was not coming from the clay body.  This allowed Carlton Bricks to reintroduce lignosulphonate to their mixture, and to make plans to address the issue with the dryers in the following shut down period. 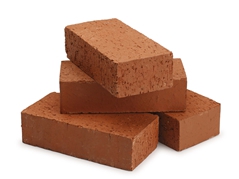