A manufacturer approached Lucideon with a production issue whereby one of their plastic components was not molding satisfactorily, leading to significant delays and increased production costs.  The client had recently switched suppliers since the original raw material was discontinued by their previous supplier.

Samples were sent to us for testing which included a known ‘good’ component and a known ‘bad’ component.  Our polymer team proposed the investigation of the thermal properties of both the good and bad components as well as infrared spectroscopy (FT-IR) and gel permeation chromatography (GPC) to investigate the chemical properties and molecular weight distribution, respectively.  Through this analysis, FT-IR analysis confirmed that the correct polymer resin was being used and thermal analysis was consistent between known ‘good’ and ‘bad’ components.  Further inspection with GPC indicated that there was a reduction in molecular weight of the failed component. Molecular weight influences the rheological properties of polymer melts such as melt viscosity and die swell, therefore existing mold parameters were incompatible with the new raw material which lead to unsatisfactory product characteristics.

Through a combination of expert consultancy and identification of the subtle differences between the raw materials, the client was able to adjust their molding parameters preventing further delays in production. 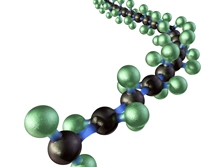