Portcullis House in Westminster, London was designed by the architects Michael Hopkins and Partners and engineers Ove Arup and Partners. The location and design brief for the building provided numerous obstacles which had to be overcome.

The site was in a position of exceptional architectural importance, next to a UNESCO World Heritage Site, in a Conservation area, surrounded by listed buildings, including the Grade 1 Palace of Westminster, and affecting views from a large part of the South Bank. Portcullis House was to have a 120 year design life, and incorporate low energy building services.

Lucideon (then Ceram) was commissioned to test the natural stone masonry chosen for Portcullis House. The building’s location, close to the Palace of Westminster led to the selection of Derbyshire sandstone for much of the structure, and granite from Dartmoor for the more heavily loaded situations. The guidance on the structural design of natural stonework is relatively limited; in the majority of situations it is treated in a similar way to concrete blockwork. Detailed guidance is not always necessary as most masonry designs feature generous safety factors for the lightly stressed, thick walls. The Portcullis House design was different and required the accuracy of the design confirming.

Testing the masonry involved building a series of 300mm square stack bonded specimens with both stone types and a variety of joint thicknesses. The specimens included a narrow (5mm) joint reinforced with stainless steel mesh to resist the tendency for lateral spreading under a compressive load. The tests were conducted in the 1,000 tonne compression testing machine in the Lucideon structural testing laboratory, one of the few laboratories to have a machine of this capacity. Some of the granite specimens were too strong to break, even under the 1,000 tonne maximum load. The failures which did occur created spectacular explosions, with the specimens reduced to dust.

This programme enabled a comparison to be made between the stone cube tests and the assembled masonry. The results meant the final design could be completed; the reinforced joint was selected and target stone strengths were established for the quality control during stone supply.

The client was the Parliamentary Works Directive which meant the project was essentially publicly funded, and therefore the results of the testing were publicly available. Under a Partners in Innovation project these results together with others from the literature and those made available by Lucideon's commercial clients were collated. A report entitled 'The Development of Design Data for Natural Stone Masonry' was published. This formed the basis for improved guidance on the strength of natural stone masonry which was included in the 2005 edition of the Code of Practice for Use of Masonry which was published by the British Standards Institution.

Through Lucideon's project involvement, specific information has been built upon to improve the design of modern, natural stone masonry buildings. 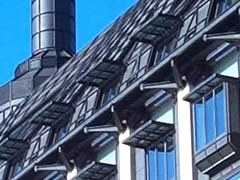