Crystallite Contamination in a Drug Formulation

Our client, a pharmaceutical manufacturer, approached Lucideon (then called Ceram) to identify a foreign crystalline material that had appeared in a drug solution during storage.

As only a microscopic amount of crystallite was present, which would have been of insufficient quantity for bulk analytical techniques, our experts used ToF-SIMS (Time-of-Flight Secondary Ion Mass Spectrometry) to identify the crystallite.

After collecting the material on a fine filter, a small clump of crystallites on the filter surface was analysed. The measurements involved the latest technology whereby RAW data were acquired from an area containing some of the crystallites of interest. Retrospectively, mass spectra were created for blank filter and crystallite regions providing, by comparison, the mass spectral fingerprint for the crystallite.

The information was then further enhanced by retrospective chemical mapping which clearly showed the crystallites (red; using a peak from the mass spectral fingerprint) on top of the filter (green; using a signal which is filter-specific). This work indicated that a polymer additive had leached out of a bottle stopper, into the drug solution and crystallised.

Thanks to our analytical expertise, the pharmaceutical manufacturer was able to identify the crystalline material and its source, thereby allowing the problem to be rectified. 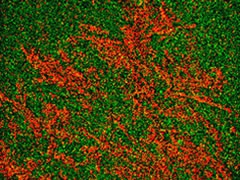