The Round Foundry was the first site where all of the trades needed for making static steam engines were assembled. The listed buildings were of historic importance, but unfortunately in quite a poor state of repair.

The site was to be redeveloped in a sympathetic manner and include a mixed development of apartments, café-bars and office spaces. Lucideon (then Ceram) was chosen to lead the investigation to ensure the sensitive restoration of some of Leeds' most historically significant buildings.

Lucideon conducted an assessment of the brickwork buildings, the cast and wrought iron columns and beams, and the Queen Post Trusses in the roof structure.

The testing included: chemical analysis of the hydraulic lime mortars; core drilling of structural arches; frost resistance testing on exposed brickwork and in-situ load testing of brickwork. For example, in the Fire Proof mill, so called because of the brickwork arch floors, each spanning between wrought iron beams, it was established that the brickwork was inadequate to support new floor loads and was hence used as permanent formwork for a new concrete floor.

Geoff Edgell, Divisional Director, Construction explained; "As the Round Foundry is a series of listed buildings the amount of sampling that was possible was very limited. Consequently obtaining truly representative samples was difficult. It was the desire of the conservationists to retain as much of the original buildings as possible, but clearly there was enough evidence of frost failure to condemn most brickwork, carefully balanced judgement was needed."

The testing and analysis conducted by Lucideon enabled the engineers and developers to successfully plan and ultimately complete the flagship development of previously derelict buildings.

Andrew Clay, Centre Manager for the Round Foundry Media Centre said: "The historical elements work very well and gave an established feel to a modern environment for modern business". 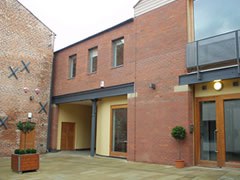