Winterton House was built in the 1960s as a steel frame building clad in glass reinforced plastic panels. The steelwork design led to awards for its efficiency but unfortunately towards the end of the century the cladding began to fail; as a result plans were made to refurbish to modern standards.

The decision to regenerate the building posed a problem for structural engineer Bryn Bird of Whitby Bird as the original steel frame could not support the extra load of concrete to be cast for the floors to improve the acoustic isolation between apartments.

The concept was to build a freestanding ‘sleeve’ of brickwork about the frame for its complete 26 storey height. A steel frame would then be erected above the roof and sit upon the new brickwork. The frame was to be jacked vertically upwards off the brickwork and steel ties from the frame were attached to the tops of the original steel columns. In this way the extra load on the frame was transferred via the ties and frame into the brickwork.

Clearly the 26 storeys of brickwork will expand and contract with changes in temperature, moisture and time dependent load effects (creep). Long term shrinkage would reduce the force in the ties to the columns and hence would overload the existing frame. All of the movements referred to are inter-related and so taking the sum of all of the movements would not be accurate enough.

Lucideon (then Ceram) was commissioned to provide structural testing and consultancy as Bryn’s plans developed in order to complete the design.

Part of the testing involved building a storey height structure outside and subjecting it to fixed pre-stress for a period of months. Separate tests were conducted to establish the likely extent of the individual movements and to estimate how the effects may combine in reality.

Lucideon carried out compressive strength tests on walls constructed from a number of brick types so an accurate estimate of the strength could be available rather than use the inevitably conservative Code of practice approach.

Lucideon provided comprehensive and experimental programmes of brickwork testing to fully characterise the brickwork and support the design decisions.

The savings made in the cost of the brickwork more than paid for the test work. 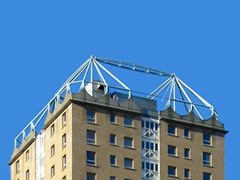