Goodrich Corporation, in support of new product development, was testing a chromium containing coating which is used in gas turbine applications where corrosion resistance is required.

The oxidation state of the chromium in such coatings is functionally important in this respect. The achievement of the appropriate oxidation state is obtained by control of the curing conditions which also improves the bond strength to the substrate. Both aspects are important in maintaining corrosion resistance during the design lifetime. Goodrich approached Lucideon (which was at the time called Ceram) with a request to measure the concentration of the oxidation states of the chromium present in a test coating in support of new product development efforts. The challenge to Lucideon was three-fold. Firstly to establish a surface sampling technique which could access the chromium, secondly to apply a technique which was sufficiently sensitive to detect the anticipated levels of chromium in the potential oxidation states and thirdly to ensure that the technique was sufficiently resolving to quantitatively distinguish between the oxidation states present.

Lucideon operates a centre of excellence in surface characterization. This team proposed the use of the technique X-ray Photoelectron Spectroscopy to carry out the measurement. Using a specific pre-treatment of the coating surface it was possible to sample a sufficient depth of coating (<10nm) to generate a useful signal strength over a manageable time period. By operating the technique in high resolution mode we were able to supply analytical results on the levels of each chromium oxidation state species to an accuracy of 0.1 atomic %. Moreover this result was achieved in the presence of a wide range of other metallic, and non-metallic, species.

The client gained an absolute measurement of the quantitative composition of the oxides of chromium in the coating surface. Using this information they were able to take decisions about the future direction of the project which saved company investment in potentially non-fruitful areas of development. In addition, the client received further technical proposals from Lucideon on the possibility of carrying out similar determinations throughout the sub-surface layers of the coating to establish oxidation state profiles with coating depth. 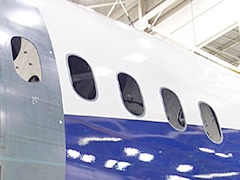