Development & Sourcing of a New Glass Material for Mansol Preforms

Mansol (Preforms) Limited is one of Europe's largest and most experienced manufacturers of sintered glass products. The company is dedicated to the manufacture and supply of sintered glass preforms, glass support rods, miniature lamp beads, glass granules and fibre-optic sealing preforms for the electronic and electrical industries.

Spray-dried glass granules are also available for their customers' in-house manufacture of preforms. Among the many applications of glass preforms, millions are used annually in the automotive sector, e.g. in air bag detonation systems.

As part of Mansol's move into sectors such as defence, telcoms and household goods, an application requiring hermetic sealing of fibre optic assemblies was identified. Having several advantages over the conventional method of metalizing and soldering, a glass material was identified as the solution; unfortunately, the id entified material was mainly used in an application that was becoming obsolete and the glass supplier was ceasing production.

Mansol therefore needed to define alternative supply routes, with appropriate testing and reverse engineering of the material(s). In many cases, mainstream glass producers would not consider small scale supply of frits as a commercial proposition and so development through such companies would be unlikely to be undertaken.

The material in question was required to display very low melting characteristics, good adhesion to the assembly components and thermal expansion compatible with requirements for the assembly and subsequent performance testing.

Earlier development work had met with limited success due to the complex nature of the material, which was not a single phase, and its unusual composition. Mansol realised that the combination of analytical facilities and materials know-how at Lucideon could help them to successfully develop this new material.

Our experts defined a test program and the material was then analysed and major phases identified. Several versions of the material were also produced for testing at Mansol's own facility. Chemical analysis was carried on the products to ensure conformance with the expected compositions.

A batch of glass was supplied for further trials and, following this, a larger amount was produced to allow qualification by Mansol's customers - often requiring conformance with stringent specifications.

By engaging with us in the original testing and subsequent material trials and larger scale frit production, Mansol was able to identify the make-up of material, recreate its composition and, importantly, create a variant from available materials, with the acceptable behavioural properties, when performance varied from the original.

In this way, an existing market could be secured for Mansol and other markets requiring very low temperature sealing could be explored. Previously, new markets for this material had been left untapped due to the uncertainty of supply from the existing source. 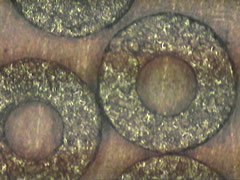